When the heart longs for one more…

Daughter of the Horizon Pack alpha, Rain is ordered to find a mate immediately or else. Desperate, she takes off and literally runs into alpha wolf shifter Jet and his beta mate Garrett from a rival wolf shifter pack. Hearing her predicament and having met her once before, Jet step ups to help, promising to mate her and save her from an unknown fate.

Jet’s actions set into motion a series of brutal events and leave Garrett questioning himself and his relationship, as he looks to Rain with a skeptical eye, unable to understand Jet’s blindness to the woman’s underlying deviousness. Out to expose Rain for the fraud she is, Garrett strives to find proof she carries the blame for murders along the pack borders which puts the groups on the brink of outright war.

Can they come together as bonded mates in time to help save their packs? Will Garrett be able to finally see the truth about Rain before it’s too late?

Haylee Tremayne is tired of the road. The concert tour for Three of Hearts was a success, but she’s confused by the inexplicable tension between her bandmates, Ben and Lucas. She’s also ready to go home to her boyfriend in Nashville. Time off would probably help everyone relax, even if it is Christmas, a season with too many bad memories.

Back in Nashville, Ben and Lucas prove again and again that their first night wasn’t a mistake. But the tension between them is still high, and on Christmas Eve, their ménage takes a stunning turn. When it all falls apart, Haylee is terrified that their crazy relationship might cost them the band, their success, and worst of all, each other.

Twin brothers Jesse and Josiah Jackmon have been faithful members of the ghost seekers for years. They have also guarded a book written by a warlock in the fifth century meant to use mortal women to bear the warlock children.

Shopkeeper Jesse knows the book has to be kept secret, but lately there has been a great deal of interest in the book, including from two beautiful fairies, Luna and Sebille, who want to take the tome for themselves.

Soon, Jesse realizes that everything isn’t always what it seems, and you have to learn to trust people, no matter how long you’ve known them.

Even though she’s a powerful witch, she’s not strong enough to take on a vampire–especially one who could make her orgasm with a thought. So she hires MacKenzie, a werewolf mercenary, to do her dirty work. Not to do her. But their chemistry explodes into a scorching one-night stand.

Alone. The future of his world on his shoulders, Prince Duncan Caldwell has to connect the dots. To pick up the pieces of broken love. Before the new edition of the Game. Before the terrible loss awaiting him at Black Rose. But not alone. Not without his angel. Certainly not without his princess. For only her power will save him.

Join Duncan, Ylianor and Chris in the explosive conclusion of the Virtus Saga. The book that ends yet begins it all anew.

Angel or Demon? Angel and Demon! Two faces. One fucking gorgeous man! And only two people to switch him either way. Now he’s going to prove himself to the entire universe. The past in his power. The present in his lust. The future in his temper. Because as he says, us is sex!

In the emergency room, the first hour after an accident can be the difference between life and death. For Dr. Amanda Hogan, that hour has become a metaphor for her life. Back in the ER for the first time in two years, she is trying to recover from a terror of her own, all while juggling the interest of the acerbic but talented Dr. Fraser Anderson and the devastatingly charming Dr. Nathan Wahr.

Fraser has his own trauma to deal with, or not. He doesn’t need another doctor invading his ER, especially not when Nathan is a constant presence and a constant reminder of when Fraser was at his most vulnerable. But his denial of Nathan weakens as his attraction to Amanda grows.

For Nathan, it’s all a waiting game. He knows his reputation as a ladies’ man is a double-edged sword, and Amanda isn’t easily taken in by a pretty face. But he wants her as much as he wants Fraser, and he’s not afraid to say so.

In an emergency, there is a small window of time between life and death. Sometimes in matters of the heart, that’s true as well.

Sabine Babineaux, daughter of the mayor of New Orleans and waitress at The Three Princesses bar, is snatched from the street after a late night at work and knocked unconscious. Waking in a cage, Sabine is determined to escape and take the other women in the basement lair with her.

Stuart Renwick and Kyle Novak, detectives with the New Orleans police department, are assigned a kidnapping case with multiple victims. However, when one of the missing women, Sabine Babineaux, arrives at their precinct, injured and terrified, they take the damsel in distress under their wings and into their home. But the gallant detectives find their princess a big temptation. What will she say when they tell her they like to share?

Can they work fast enough to find out who the kidnapper is and bring them to justice or will they take more victims or come for Sabine again?

Will Sabine survive long enough to explore her feelings for both detectives? Or will Stuart and Kyle fall at the hands of her kidnapper?

Laira Marshall had to admit—getting kidnapped wasn’t something she’d expected. Discovering her kidnappers were aliens who planned on selling her into sexual slavery, definitely tipped the scales into the truly bizarre. But she’s determined to fight her way through this—until their slave ship is attacked, and Laira’s faced with an entirely new problem.

Rakin and Dev were the leaders of the Sandaki—a race genetically engineered to fight. Using their enhanced traits, they’ve freed their people and have devoted their lives to seeking out those who enslaved them. They never considered the concept of love—or that one woman could bring them to their knees.

With unknown enemies working against them, the three lovers must come together not only to save themselves, but the Sandaki race itself.

One woman’s campaign to win the hearts of the two men she loves.

Jasmine left the Sweetwater Ranch and the Morgan brothers, no longer able to bear the painful dilemma of loving them both. After a year away in which she gains new perspective, she returns home with one goal. To make Seth and Zane Morgan hers.

Jaz may have left an innocent girl, but she’s returned a beautiful, sensual woman. Seth and Zane aren’t prepared for the full on assault she launches and each are battling an attraction they’ve fought for years. She wants them both, but Seth has no intention of sharing his woman. It’s up to her to change his mind because she can’t and won’t choose between two men she loves with equal passion. For her, it’s all or nothing.

Mia knows they’re dangerous men, but Terror and Rage make her feel alive for the first time since her husband’s murder, where she nearly died. Though she carries the scars of the attack, she has moved on. One glimpse of the new bikers in town and she can’t stop thinking about them.

Terror and Rage are instantly attracted to the dark-haired beauty who serves them drinks. They try to stay away from her for her own protection while they rebuild The Howling Death M.C. When people start to die and a rival M.C. threatens their town, they can’t ignore the threat to her and intervene. They will do anything to protect her and make her theirs.

Mia has to decide if living a dull but safe life is enough for her, or if she wants to find love between the two men who make her feel alive.

Shana Gallagher’s been hacking one of Manhattan’s most corrupt executives, transferring millions from his accounts to those of his victims, making him pay for what he’s done to them. Using her skills, she convinces Mike Russo and Cody Latham to hire her at their intelligence-gathering firm, where intimate details help their clients.

Never has Mike met a woman as delicious as Shana. Smart as hell, curvy, and assured, she’d be a delightful challenge in bed. Cody’s carnal hunger is equally intense. He and Mike want to know everything about her.

She won’t divulge the secrets of her past. All she can offer is unquenchable desire and her heart.

During weeks of shameless lust and pleasure, Mike and Cody peel away the layers of Shana’s life. The stunning truth changes everything. They’ll do all that they can to keep her safe…and in their arms.

Paige Drummond has been offered the job of her dreams. Crave is set to open a boudoir photo studio and the owner wants her to do the design work. There’s only one problem. She’s given up the dream she’s worked so hard for because of a devastating blackmail attempt. Ashamed, she holds the dark secret close to her heart and refuses to tell even those closest to her.

Enter Nate Hughes and Sloan Davis, two sexy-as-sin contractors whose love for construction is only outweighed by the size of their hearts.

When too many convenient accidents haunt Paige, Nate and Sloan decide the safest place for her is in their arms. When the passion of ménage burns hot and sweet, can they both protect her against the unknown threat and convince her to stay forever? 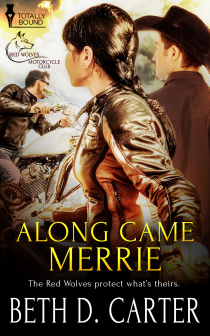 This is book one in the Red Wolves Motorcycle Club series, see the full series listing here

Merrie stumbles into a bad situation, forcing an outlaw motorcycle gang to deal with her, but her escape leads her into the arms of Braden McClintock and his brother Leo Cloud Dancer.

Merrie Walden is in the wrong place at the wrong time. When she sees something she shouldn’t, she’s attacked by a vicious outlaw biker bent on shutting her up permanently. Luck is with her and she escapes by jumping out of a moving car. She’s found by horse rancher Braden McClintock who takes her to his adopted brother Leo Cloud Dancer for medical attention.

As she heals in the men’s home, Merrie realises that she’s falling for them both. Braden is taciturn, while Leo is outgoing, and both men reach a deep-seated need in her that she never realised she had.

But, before she can figure out if they can share a happily ever after, she has to survive the biker who has discovered her hideout.  Even if she doesn’t know what she had witnessed, he sure as hell does.

And he wants her silenced.

Publisher’s Note: This book is best read in sequence as part of a series.