Sean, Patrick and Sandra are the Three Musketeers. They do everything together including work at a successful gym called Boot Camp. Sandra Patterson, is the resident nutritionist, but trainers Sean and Patrick want more than a platonic relationship.

Despite Sandra’s attempts to keep the rumors at bay, everyone at work thinks they’re doing more than working on the gym equipment. It doesn’t help that her private ménage a trois fantasies often star her best friends.

Can three weeks of passion lead to unconventional love or will cabin fever ruin their friendship forever?

My name is Stephanie Williams. I am a native of Los Angeles, born 48 years ago. I am a full-time home business owner in the export/import trade as well as a contract purchasing agent for a medical facility. I enjoy opera, classical music and am a huge history buff. Reading is my passion and it’s not unusual for me to read a book a week whether it’s War and Peace or short stories by Poe and of course romance and erotica. I’ve traveled extensively and it’s not unusual to find me celebrating Christmas in the Land Down Under with a shrimp on the Barbie.
Stephanie

1. Why did you choose to write ménage? What intrigues you about this particular genre? Ahem…well, lets just say it’s near and dear to my heart. LOL. I happen to like the dynamics of the relationship. To have three people love each other, whether M/M/F, M/F/M, M/M/M, F/F/F or any combination thereof, is just wonderful. To be able to be in touch with one’s emotions and focus on the relationship and not get jealous of the other always fascinated me. Now the sexy part. Who wouldn’t want two guys (if you’re in a M/F/M relationship) loving you. LOL!

2. Tell us about your latest ménage release: what’s it all about? Where did you find the inspiration? My latest release which is doing very well, is CABIN FEVER. It’s a simple concept with complicated emotions. Sandra Peterson is best friends and co-worker with her two best buds, Patrick and Sean. They each are sexually curious about the other, but they both want to respect the friendship. They value that more than anything. They love her too, it’s not just sex and they don’t want to cross that boundary if it destroys everything they have. But fate comes in and they have to go to The Rockies to see about a cabin and they are stranded, so they are forced to come clean to each other and their feelings. My inspiration? My own life. I have a wonderful husband and we have a mutual male friend that I love dearly.

3. Who is your favorite ménage character(s) and why? Funny enough it’s Marty and Jerry from my other ménage book FOR RESEARCH PURPOSES ONLY. Those two are very close to my guys, plus the fact I think it’s my most romantic ménage, not just sex. Although that’s pretty dame hot too. LOL

4. In your opinion, what makes a good ménage novel? Emotions, emotions. I love reading a ménage and feeling a conflict of emotions. Yes, the sex is great, but I need to feel something from the characters. If it makes me laugh or cry, it’s a great story.

5. What do you think of ménage romance in general? Do you think numbers are important in ménage stories? The more the better or maybe not? Hmmm. Great question. I read a few books that had at least four men and one woman. Now when I bought one of these books, I didn’t think it would be any good cause I’m thinking: “How can you keep up with so many characters? I bet the writer will get them mixed up. Nope. I was pleasantly suspired! The book was great, all the characters had their own distinctive voice and you connected with them. Having said that, I don’t think the numbers are important. If you’re a good writer you can pull it off. You can make it seem believable even if you have six men and one women. So if the story is tight and the characters are right—go for it!

6. What sparks your ménage imagination to the point of writing one? Is there a particular source of inspiration for your ménage stories? *Looks over at the hubster and friend* Maybe. LOL!

7. What is your favorite gender combination in ménage? More men than women? No women all men? Why? More men! If it’s five men one woman, six men on woman, (see a trend here?). Why? Well, I’m a straight gal and I love men, so I try to put myself in that situation. Not literally!

8. Do you prefer to use straight, gay or bisexual male character? Why? What influences your choice? Straight at this point. Reason being is because I don’t know personally of any ménage with gay or bi people, haven’t even interviewed any. Although I have read a few. So I wouldn’t try to attempt to write something like that without having more knowledge of such a union.

What influences my choice? *Again, looks over the hubster and best friend.*

9. In your opinion, inside a ménage with more than one man, is the woman character condemned to a passive role? Or can she be portrayed as dominant? Is she just a toy, a doll in the men’s hands, or can she assert herself as a woman and an individual?

I think both. Now my stories, she’s kinda passive in the sense that the men are seducing her and she’s either allowing it or trying to fight it. I write this role well because it’s more like myself. I’m not a dominant person, BUT, I’m not a toy either. I just at the moment haven’t written a female character that is dominant because I know it won’t be honest since that’s not my nature.

HOWEVER, that doesn’t mean that it doesn’t work. I think it’s great that there a lot of stories out there where the woman is the aggressor, take charge kinda chick. I think it’s sexy that she knows herself and not afraid to ask for what she wants.

I also believe that even as a passive role, she can still be an individual. That’s just her nature. If the men respect her they won’t use her as a toy—unless that’s what she wants.

10. In your opinion, can a true ménage work in real life? Why or why not? Yes and no. How’s that for an answer? LOL. Seriously, it can work, but it has to be with people that are emotionally capable of handling the feelings that will arise with such a union. There has to be a meeting of the minds, you need to go in the relationship with both eyes wide open. Mainly, you have to understand that this is a ménage, not a threesome which is entirely different. A ménage is a committed relationship between three people and is an arrangement

11. Do you think there is a difference between ménage sex and ménage relationship? Are the two one and the same? Or can one be without the other? Hmm, that’s a great question. I truly believe that a ménage arrangement can happen without sex—in the beginning. However, if the people love each other and there is trust, then the sex will inevitably happen and it is part of the relationship. It goes hand and hand and it’s very natural.

12. What do you think of reviews on ménage books? Do you find they capture the essence of your work? If yes, why? If no, why not?

It depends on what the reviewer in looking for. Remember, all reviews are subjective. For the most part people get my work. Then there are others that take it too seriously and don’t see where I’m going.

I either get “Too much sex” or Not enough sex” Like with this latest, someone wondered why I spent time in-between talking about the cabin. Well the point of the story is two-fold. It’s with getting this cabin together and the relationship. I wasn’t going to write a ‘fuck fest’. I wanted it to be a gradual and natural transition. People do other things besides have sex. This was three friends, dealing with others problems too.

My heroine was a passive (or submissive, which some people pointed out), but that’s how I wanted her. I wanted her indecisive but at the same time not fooling herself about her true feelings.

But like I said a lot of people get my ménage stories, I got great reviews for CABIN FEVER and for FOR RESEARCH PURPOSES ONLY.

13. Tell us about your future projects. Do you have a new ménage romance coming out soon?

I am working on a prequel to FOR RESEARCH PURPOSES ONLY. I held a contest a while back for story ideas and someone won. I will be dedicating that book to them.

I’m also working on a paranormal ménage. One with a Vamp and a Werewolf, it’s also a tongue in cheek comedy which is something new with me. 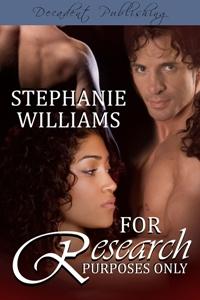 Lacy Cunningham prides herself on being a prolific writer in the romance and erotica industry. However, for the first time, she’s stumped by her latest project—a ménage à trois. She’s doing everything to help get her creative juices flowing, from reading others works, buying non-fiction books on the subject to renting DVDs—everything short of participating in the act itself.

Her boyfriend, Marty and Jerry, her first crush from college, are more than willing to help her with her research. With Jerry arriving in town for vacation, Marty mentions the possibility of a ménage à trois, and Lacy mulls over taking her studies a bit further. But it’s going to take a lot of prodding on the guys’ part before she actually indulges in that kind of research.

14. Where can the fans find you and find your books?

15. Please tell us where readers and fans can find you on the net.

16. Is there anything you wish to share with the readers?

I’ll be holding more contests this year. This is the year I promised myself to be more diligent in the social media arena, so check out my blogs periodically. I have two new books coming out in March and April. OFFICE PLAY and LECTURES IN DISCIPLINE. They are part of my Freaky Geek Series.

And as far as reading new genres like ménage, be open minded. You’ll be amazed at what normal people are doing behind closed doors. *WINK WINK*