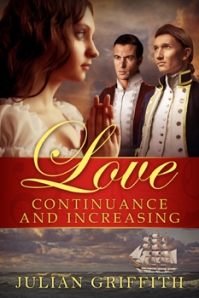 Mary, thanks for having me here today! I’m glad to have the chance to talk about my new book, Love Continuance and Increasing, which is a historical MMF ménage romance set in England during the Napoleonic Wars, between a naval officer, Lieutenant William Thorne, his lover Lord Anthony Rockingham, who’s an army major as well as a viscount, and Rockingham’s young wife, Caroline.

It may seem strange to have a ménage romance set in the early 19th century. Most people think of past centuries as being very strait-laced and conservative compared to the present day – but that wasn’t always the case at all. In fact, the conservative morés of the Victorian era were a direct reaction to the much more permissive standards of the Georgian era that came right before it. In the late 18th and early 19th centuries, there were some notorious ménages à trois involving some of the most famous and powerful people in the land, and I’d like to tell you about two of them.

Georgiana Spencer married William Cavendish, the Duke of Devonshire, on her seventeenth birthday in 1774. She rapidly became a leader of fashion and an important political figure. Women couldn’t vote or hold office then, but it didn’t keep them from exercising a great deal of influence by creating social events and talking to the men who could! And in 1782, Georgiana became best friends with Lady Elizabeth Foster, and made her part of the Cavendish household. Georgiana, Bess, and the Duke lived together for the next twenty-five years, and it was openly known that Bess was the Duke’s mistress. She even bore him a son. It’s possible that Georgiana and Bess were lovers as well; it’s difficult to tell because women of the time often sent each other flowery, romantic letters, wrote each other poetry, and were physically affectionate in public. It was seen as an admirable type of friendship that demonstrated the women’s refined sensibilities. When Georgiana died in 1806, the Duke married Bess. While some people might have considered the three of them scandalous, it never made them outcasts; the Duke’s wealth and political power made them the ones to decide who was acceptable and who was not.

Another famous ménage à trois was that of Horatio Nelson, Emma Hamilton, and her husband Sir William Hamilton. Unlike the Duchess of Devonshire, Lady Hamilton was not from an aristocratic family; she was born Amy Lyon, the daughter of a blacksmith who died when she was two months old. She was working as a maidservant by the time she was twelve, and later as an actress, a dancer, and a model who specialized in posing semi-nude for the entertainment of gentlemen. When Emma was fifteen, she became the mistress of Sir Harry Featherstonhaugh, and then (not much later) the mistress of Charles Greville. When Greville married, he felt he could no longer keep Emma as a mistress, and sent her to Naples to live with his uncle, Sir William Hamilton, who eventually married her. It was there that she met Horatio Nelson in 1793, and they began a passionate affair that would last until Nelson’s death at Trafalgar. Sir William, who was past fifty when the eighteen-year-old Emma came to live with him in 1783, didn’t object to the affair, even when Emma bore Lord Nelson a daughter in 1801. In fact, when Sir William and Emma returned to London, Nelson lived with them openly. Perhaps because Nelson was a national hero, this became a source of public fascination more than disapproval: newspapers reported on everything they did, and Emma was considered a leader of fashion. It makes the Kardashians look dull, doesn’t it?

Stories like these gave me the confidence to write a MMF ménage à trois set in the first years of the 19th century. If those people could get away with it, why shouldn’t Lieutenant Thorne, Lord Rockingham, and Caroline get away with it, too? Rockingham and Thorne had been lovers before Rockingham ever met Caroline, and, though they broke off their affair when Rockingham married, they never stopped caring about each other. And Caroline didn’t stop loving her husband when she and Thorne fell in love with each other; why shouldn’t she be able to have both of them? A much more satisfying solution than lies and betrayal and divorce.

Of course, they faced some additional difficulties. Unlike Georgiana and Bess, Rockingham and Thorne in my story can’t allow people even to suspect that they’re lovers, as sex between men was a capital crime in England then (it wasn’t for women). But Thorne and Rockingham were already used to being very discreet and letting the world see them only as friends. And it wouldn’t be very odd for a wealthy viscount like Lord Rockingham to have a good friend as a houseguest for months at a time; some less wealthy single men spent their lives as other people’s guests, moving from one friend to another and never having a place of their own. Couch-surfing is nothing new!

There’s also the question of children. The Duke of Devonshire wasn’t as tolerant as Sir William; even though he’d fathered a child with Bess, when Georgiana became pregnant as a result of her affair with another man, he forced her to leave the country and wouldn’t allow her to return until after she’d given up the child. It didn’t matter to the Duke that Georgiana had borne him several legitimate children, including an heir; she might be expected to raise his children by other women, not only Elizabeth Foster’s but a child by another mistress as well, but he was not going to provide for any other man’s child. Most men probably would have agreed with him. On the other hand, Georgiana’s friend, Lady Melbourne, had a very different arrangement; her first child was her husband’s, and, after that, all of her children were fathered by her lovers, and Lord Melbourne knew and didn’t care. Caroline and Thorne in Love Continuance and Increasing don’t meet until her son’s christening, and it doesn’t seem unreasonable that Lord Rockingham’s attitude would follow Lord Melbourne’s example in that case, especially when he cares so deeply for Thorne. Writing the scene where Rockingham tells Thorne so had me sniffling a little, I can tell you.

It’s so easy to think of upper-class marriages in history as being arranged, loveless matters, where the spouses had affairs because they never cared about each other at all. It was a pretty common situation, common enough for the artist Hogarth to satirize it in his series of engravings called “Marriage à la Mode”. But not everyone’s story fit into that same box, and I wanted to tell a story where there was enough love to make everyone happy instead.

Lieutenant William Thorne, of His Majesty’s Navy, is a man of humble origins. He knows that his affair with Major Anthony Rockingham of the 43rd Infantry can’t last forever, not only because the war against Napoleon has sent him on blockade duty in the English Channel while the major’s regiment trained ashore, but because Rockingham is a viscount, and viscounts must marry. When Rockingham’s letter reaches him, saying that he’d chosen Miss Caroline Filmer as his bride, it is no more than Thorne had expected.

What he does not expect, when he returns home after the Battle of Trafalgar, is to find an invitation to the christening of Rockingham’s son. He does not expect, when he meets the young viscountess, that he would fall instantly and passionately in love with her. And he certainly does not expect that Caroline would fall just as desperately in love with him. Thorne is sure that their feelings for each other can only lead to disaster, even more so as his love for Rockingham has never gone away. While the war with France continues, Thorne finds himself fighting a war within his own heart.