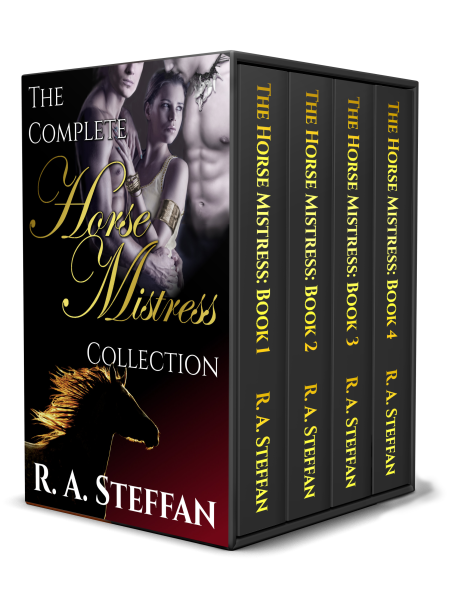 My name is Carivel, and I have a scandalous secret. I was born female, but I’ve been living as a boy for years in my adoptive village of Draebard. Getting too close to anyone risks revealing my birth sex, and if my secret gets out, I’ll become a pariah—facing exile, or worse. The last thing I ever needed was to fall in love with two unattainable men. The last thing I ever expected was for both of them to love me back.

It’s not just me, though. The men I love have secrets, too. Senovo, a eunuch priest, has been hiding his shape-shifting curse, convinced that the wolf inside him is a cold-blooded killer he can’t control.

By contrast, Andoc is a fierce warrior and a favorite of the village chieftain. But if his history of male lovers—including Senovo—came to light, that could all change very quickly.

Now, the three of us are embroiled in a desperate bid to unite the ragtag tribes on the island of Eburos against an invasion by the powerful Alyrion Empire. One by one, our secrets are coming out. And it isn’t merely our own lives at stake—far from it. If the negotiations fall apart, it might just mean the end of everything.

Nominated for the 2016 Rainbow Awards and the 2017 Lambda Literary Awards, The Complete Horse Mistress Collection is an explicitly steamy paranormal MMF ménage romance with a twist. If you love noble, damaged protagonists overcoming impossible odds to find lasting love and happiness (not to mention smoking hot, tender sex), The Horse Mistress series is for you.

Hello R. A. Steffan, thank you for agreeing to this interview. Tell us a little about yourself and your background?

Hi, Mary! Thanks for having me. These days, I’m a frustrated farm girl living in a tiny bungalow in the middle of the city, trying to prove to my husband that writing is a legitimate way to make a living so I can get my life back from the exhausting second shift warehouse job I’m currently stuck in.
I started writing seriously in 2005 (fanfiction and ghostwriting for other people). I started writing professionally under my own name in 2014, and have since published eight novels, two novellas, and several boxsets.
Outside of writing, I ran a stables and horse-breeding operation for seventeen years, and a diversified small farm specializing in humanely raised meats for five years. I still have two horses—my retired riding horse, and the last filly I ever bred (now almost ten years old—yikes!). They live with my parents on their hobby farm, and I drive out every day to take care of them.
Let’s see, what else? Oh, yes… I illegally keep ducks in my back yard within the city limits. Not only is it a way to stick it to the man, but I’m still producing at least a portion of my own humanely raised and butchered meat, along with all the eggs a family could ever need. Take that, governmental authority figures! Ahem. So, anyway, that’s my life these days. Get up, take care of critters, get 1,000 new words per day written on the page, go to work and throw 60-lb. boxes around for eight hours.

What inspires/ed you to write a menage?

I still tend to read way more fan fiction than original fiction, and many of my favorites over the decades have been ménage stories, usually MMF or MMM. I’m a complete sucker for the “found family” dynamic, and that’s a much easier theme to pursue with three or more people in the mix. When I ventured into writing in the romance genre, it seemed like an obvious path to take.

What is the kinkiest sex scene you have ever written?

As a former ghostwriter, you have NO IDEA the can of worms you’re opening with this question, LOL. Let’s just say that both tentacles and breath play were involved. Though in my defense, the tentacles belonged to a sentient alien, everything was consensual and negotiated beforehand, and all parties were more than satisfied at the end. Even the tentacle monster.

Can you share a little of your current work with us?

Absolutely! It’s a spinoff series of The Horse Mistress, so I’ll stick to the blurb so as to avoid potential spoilers. The main character appears in The Horse Mistress series for a grand total of one scene, and has, if memory serves, two spoken lines. Yet, when I thought about which character’s story I most wanted to expand on in the new series, she was far and away the winner.

“Kathrael is a nobody—an escaped slave with acid burns on her face and a giant chip on her shoulder. Despite being alone in the world, with no possessions except the clothes on her back, she has vowed to lead a rebellion against the brutal overseers who once owned her. First, though, she’s going to murder the cowardly bastard of a shape-shifter who was prophesied to save them all, and didn’t.She’s fully prepared to die along the way, if that’s what it takes. But falling in love? Twice over? Yeah. Admittedly, that part she really didn’t see coming.”

What are your thoughts on writing a book series?

I find writing series much more fulfilling than writing standalones, though I’ve done both. The challenge with series is to find stopping places that are satisfying to the reader while still leaving them hungry for the rest of the story.

I try to make it very, very obvious to readers up front that the books are part of a series, by subtitling everything BOOK 1, BOOK 2, BOOK 3, etc. I always make Book 1 free (though I’m flirting with NOT doing that in the series I’m working on now). Then I offer a boxset of the remaining books two-through-whatever at a deep discount versus buying the series individually.

I’ve had reasonable success with that approach so far, and only a handful of scathing reviews complaining that the free book doesn’t tell the whole story and you have to buy other books to finish it.

Are there underrepresented groups or ideas featured if your book?  If so, discuss them.

Oh, wow. If it weren’t for underrepresented groups, I’d hardly have any main characters at all! The main character in the Horse Mistress series, Carivel, is genderqueer. She was born with a female body, but claimed from a young age to have a male spirit trapped inside. She finally ran away to live in a new village where she could pass as a boy—and did so successfully for three years before her secret came out.

One of her lovers is a eunuch (a former slave who was castrated very much against his will), and the other lover is bisexual in a culture which is completely intolerant of gay relationships.

One of the characters in the upcoming spinoff series is a bi-romantic asexual, which is so far off readers’ radar that the resounding response so far has been, “He’s what, now?” And, of course, the main character in that same series is a former prostitute who has horrific facial scars from an acid-throwing attack by the angry wife of a client. So… um. Yeah.

Thank you so much for this great interview! I hope menage romances lovers will make sure to add you on their reading list! Thank you very much for taking the time out of your busy schedule to take part in this interview. ~Mary

Thank you Mary. I’d love to give away ten free copies of The Complete Horse Mistress Collection audiobook to people who comment either on Facebook or your blog under this post. The audio would come as an Audible.com gift via email, so I would need email addresses 🙂 ~RA Steffan

R. A. Steffan began writing for pleasure in 2005. After honing her skills for a few years in amateur circles, she eventually transitioned into freelance nonfiction writing and ghostwriting professionally published short fiction.

The Queen’s Musketeers series marked her first foray into both serialized stories and novel-length works. The Horse Mistress series arose from a desire to write something focused more on the developing relationships of the characters. She has found the experience of wrangling more extended and intricate plot lines Palong with a larger cast of characters to be educational, frustrating, and fulfilling by turns. With luck, the end result will prove to be an enjoyable experience for readers.

When not writing, the author enjoys reading, horseback riding, walking her dogs, and raising a small backyard flock of ducks.