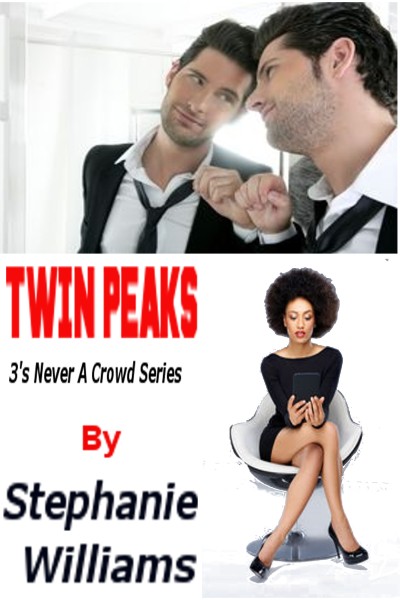 Marissa has always had the hots for her best bud Scott. Ever since they shared a kiss on Valentine’s Day, when they both were feeling sorry for themselves for being single, he’s been on her mind day and night.

When she and Scott finally consummate their love, little did she know someone was watching them…Scott’s identical twin brother! A brother whom she knew nothing about, but now is getting to know a little better.

Scott and Sam shared everything as kids and it didn’t stop in adulthood. They even share the same taste in women. Can they do the ultimate “share and share alike”, with Marissa’s feelings hanging in the balance?

“Ever have sex with your clothes on?” he asked, as he unfastened his belt.

She propped herself on her elbows. “Can’t say that I have. But I see you disrobing.”

“Ahh. I asked you, if you ever had sex with your clothes on.”

“I love the way you look in just your undies, stockings and heals. I think it’s sexier than being buck-naked. Plays on the imagination.”

He unzipped his pants and crawled on the bed beside her.

Scott lifted Marissa up and she wrapped her legs around his waist. He moved her panties just a bit over her pelvis. He took his finger and lightly stroked it over her clit. It was hard, swollen and slick. That made his dick jump and a stream of pre-cum dripped from its slit.

“Time for foreplay. Let me taste you first.” He was so gentle with her, kissing every part of her body, rubbing and massaging at her skin. He brought his lips down on her sweet smelling pussy and planted soft kisses around her clit.

He wanted to take things slow, for himself and for his audience hidden in the closet. His tongue came out and he licked her very slowly from the top of her cunt all the way down to her opening where he’d placed his tongue inside of her and then back up again. He could see and feel her going wild with ecstasy. The moans and groans that escaped her lips, had him harder than he’d ever been with any woman!

This was going to a wild night.

Marissa never felt anything so wondrous. The fact that she was finally being made love to by her best friend heightened her arousal.

At the moment she just lay back and enjoyed the hot wet tongue of her lover. The harder and longer the strokes, the closer she was to coming. Oh, god, she wanted to feel him inside her now. Her hips were gyrating, trying to get his tongue deeper inside her, but it just no use. She needed him. She wanted to feel is cock.

He finally came up for air from between her legs. “Not so fast, baby. I want to feel your hot mouth on my dick.”

Marissa nearly came right then. Instead, she tried to compose herself. She raised herself off the bed again, and Scott positioned himself in front of her kneeling, stroking his cock. Marissa lay down halfway and took his huge, hard shaft in her hand, then she sucked him as best she could, taking in as much as she could handle without choking herself. She sucked him hard, tasting his precum. His hands came down and he placed them on her head; holding it tightly to him. She could tell he was about to come soon by the tightening she could feel in his balls as she stroked them.

“Now, I want to get deep inside you. Any which way I can,” he growled.

Free spirited and animal loving Jackie, is at her wits end with the strange noises in her new home. One night, they’re so loud, she thinks it’s burglars and she calls the police. They arrive in minutes to check out the place. And what a wonderful surprise; there’s a family of raccoons in her attic. But the best surprise are her hunky rescuers that answered the call. Hubba Hubba!

Officer Barnett and Officer Kline are partners on the beat—and in everything else. They get a call from a frantic woman that thinks her place is being robbed. They arrive in seconds, only to arrest a family of raccoons. But the caller is what really got their attention. Beautiful, quirky and body that’s non-stop, they both find themselves drawn to her charms.

Can they get her to play cops and robbers with them forever?

My name is Stephanie Williams and I’m an author of various erotica stories. Right now, I am taking more of a personal journey with my writing. I am now doing a series of ménage stories, each varying in sensuality, from the sweet to the raunchy. They’re all shorts, from 8k-12k in length.

If you want to read about my personal life and how I got into the ménage relationship, go to my blog: http://threeisneveracrowd.weebly.com/my-story.html

I am a resident of Toronto, Canada living with my husband and our mutual friend who is my lover too. We just call him Mutual Friend, LOL.

Besides writing, I enjoy reading, naturally, traveling and listening to music. Presently I have taking on another career path, Business Consulting