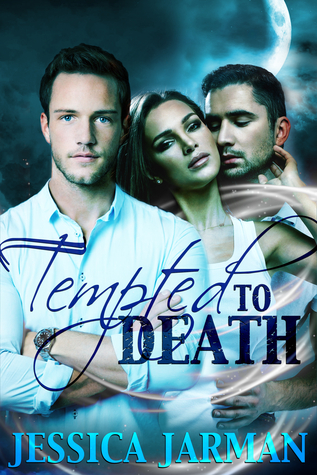 I’m an author, blogger, and rather obsessive fangirl. Having grown up in Upper Michigan and currently living in Minnesota, I’m a Midwestern girl through and through. And wouldn’t have it any other way.

When I’m not working to get words on the page, I pass the time with my amazing husband and four children, attempting to be crafty (and failing miserably), squeeing uncontrollably over my favorite shows or curling up with a good book.

Months ago, Tara Wilcox ran away from Luca Castell and Oliver Gordon. She’d fallen hard for the pair of hunters and feared their growing feelings for her. But what truly terrified her was the possibility that they’d discover what she really is. That she’s the very thing they hunted.

Luca and Oliver are partners, in every sense of the word, and their lives are spent running toward danger. Falling for Tara was the biggest risk they’d ever taken, and her vanishing without a word gutted them.

But, she’s back, desperate for their help in hunting a vicious para creature. Despite the risks—to their lives and their hearts—reigniting the love they’d had is simple. But nothing is simple when, faced with an impossible choice, Tara reveals her true nature.

Now that Luca and Oliver know the truth, Tara has another choice to make—run again or trust that their love is strong enough to look beyond the monster she fears they’ll see.

This book was a quick read and I enjoyed it.

I liked the paranormal demons hunters story. However a couple of things disturbed me.

First, I was upset to do not see this equal love I like in MMF stories. It was a MM with the F on the side who joined them. This makes me cringe all the time.

I understand that an existing MM couple adding a third woman is tricky. But in Tempted to Death, one of the male character put his male partner in #1 position without struggling one sec in term of “between him and her I choose you if you do not want her in our relationship”. That is a nono for me. That means no love. That means no respect. A menage is composed of individuals who have a different love story with each other, no more or less love, just different but equal feelings are involved and choice is not an option. In this story, the male decides to love her because his male partner loves her? well, duh!

This happens often when authors write MM. I am not sure if it is a deformation but I often noticed that equality is always tricky for those authors. They want to write a menage but they want to please their MM fans first. That is probably not wanted but that it is the way I feel.

Unfortunately, it was obvious that the woman was an extra in Tempted to Death.

The other thing that I would have liked is maybe a short intro or mention of who are the hunters, where are they coming from, why paranormals and hunters. I started reading the story as a done deal and I would have liked to know why hunters never thought it could exist good psychics along with bad ones. I felt it was a bit too black and white.

Besides that, I liked the plot. It was easy to read. I had no idea if they would succeed to save the woman and that was really nice as it kept my interest to read more.

I liked the characters, including the brother. I am thinking he deserves his own story and the author cleverly gave us an opening for it.

So overall, it was a good read but not a great read just because equality was not there. But it is still a nice story to read and I recommend it 🙂

Comments Off on Review: Tempted to Death by Jessica Jarman