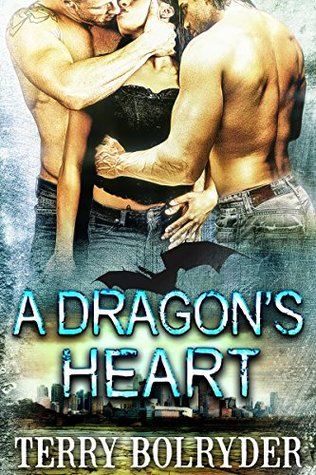 Terry Bolryder is the author of over twenty bestselling shifter romances. She grew up surrounded by mountains in the western part of the United states and loves the great outdoors. In her spare time, she enjoys reading and snuggling with her husband (who she likes to think would make a wonderful bear shifter). She writes about big, handsome men with larger than life hearts and protective streaks a mile wide and the amazing, curvy women that come to be their mates.

A mate worth fighting for…

Tor and Perry are Dragon shifters, powerful protectors of their region and the people and shifters in it. With the world only getting more evil, Tor and Perry know there’s only one thing to do. Find a mate, one brave enough to be gifted with a third dragon power to join their triad. They just need to find someone brave. Too bad the only woman they seem to be interested in is their curvy secretary, a woman they found hiding under a desk…

Lexie knows she’s no hero. Always the first to run, she is just grateful the dragons found her when they did and rescued her from a bad situation. She’s fine just being their secretary, as it gives her a safe place while they try to track down the people that are still after her. Even if being around tall, dark and handsome Tor and graceful, elegant Perry is starting to do funny things to her lady bits.

As the three work together in close quarters, sparks fly between Lexie and her dragon employers, threatening to ignite into a blaze. But though they know they can’t be together, they can’t resist stoking the flames, and when trouble catches up, all three will have to decide just what they are willing to lose, and what’s really worth fighting for…

Although I liked this menage story with dragons, I was a bit upset with a couple of things.

For example, the need to find an heroine who had to have a Dragon’s heart. The idea was interesting but the reasons to have one or not were disturbing for me. It was as if a woman had no choice: if she had one, she was good and if she did not, she was trash. If she had one, she was not able to mate dragons. Dragon’s heart in the author’s eyes meant heroism. So if the woman was lacking heroism, she was not good enough to mate the supreme beings, the dragons.

First, I was very uncomfortable the way the author presented the “excuse”. Second, not everyone is a coward because they do not save people. Anyway, I know it is a romance…. but again in my eyes there is a difference between a woman who think she is unworthy and a woman that is said by other she is unworthy. A lot of people are heroes. Like the one who dedicate themselves to others, silently. Like this lady who adopt children because someone has to do it. Like this guy who went in Central Park in the middle of winter and decided to clean some blankets for some street people. For me a Dragon’s Heart means pure and kind heart. But again, this is a romance and the author (of course) had all rights to justify the mating if the female was a true heroine in her own story.

Anyhoo, this bothered me from the start. Call me feminist. Call me rebel. Call me whatever you want, but I do not like authors who portray their heroines like victims.

Then I thought Perry’s passion for Lexie was very tame. His attraction, yes. His lust, maybe. He was described as the brain so he was thinking in terms of saving people, not love. It was as if he gave up something huge for something minor. It was almost a sacrifice from his part. Not really romantic from my perspective.

I did not really understand why the need to protect her either. That was not enough developed. She was a 2 weeks secretary and had no access to anything special. They could have just erase her memories and move on but decided to “keep” her save with them, even if it was not allowed.

I was a bit confused when I read the story and mostly because the explanations were not logical or developed. I think the author forgot that some readers, like me, never read her books and series.

It was a bit cliché such the curvy who never thought she could be loved by male models material. The heroine never fought for them. She was very passive and negative in the prospect to stay with them. She immediately accepted that she was not good enough for them. I dunno. I also did not like that.

I am not sure why this story got me the wrong way, but it did. It is a romance of fiction after all. But once I started to cringe about the heroine, I guess I was taken the wrong way. I am in the minority and good for this author who got tons of great reviews for this story. Sadly, not me.

This said, it was a sweet romance, easy to read and I read it up to the last page which is good. However, my advise here is probably to read other Dragon’s stories from this author. In doing so, readers will be immersed in this Dragon world the author, Terry Bolryder, created and it will probably be easier to understand between the lines and truly appreciate the story. 🙂

Comments Off on Review: A Dragon’s Heart by Terry Bolryder