Review: Werewolf U by Brenna Lyons

She’s taken Spinetingler’s Book of the Year for 2007, and she’s also finaled for multiple times for the EPPIE, PEARL (including one HM, second to Angela Knight), CAPA, and once for a Dream Realm Award.

She  teaches classes in everything from POV studies to advanced editing, networking to marketing.

Samara has been given a full scholarship to Lupi Lucania Universitas Scholarium in Italy. It’s a dream come true. The university is one of the best in the world, and she intends to make the most of it. What she doesn’t count on is two very distracting brothers who have a different idea of advancing her education than she does.

Usually she-wolves come to the University with full knowledge of Lupine history and traditions. James and Jason will have to teach their little mate everything. Born to a human who refused to take her wolf mate permanently into her life, Samara is nothing like what the duo envisioned…and more than they ever hoped for.

So I wanted to read a werewolf story and decided to give Werewolf U a try.

It started very well on a drama note. I liked it. I was intrigued but then the author kept me on my hunger. Then I started to realize that a lot of things within the plot were left undeveloped. Either the author thought it was very obvious or she just rushed the story. I am not sure. I just felt it was an unpolished story which is very weird considering Mrs Brenna Lyons published over 80 stories, is a member of prestigious writing associations and known worldwide.

So if I am definitely impressed by Mrs Lyons career, I was not with this story. So let me develop why I gave a one star only…

Not knowing that the very chic establishment named Lupi Lucania Universitas Scholarium did not have a direct connection with wolves, is a sign of being incredibly naive or incredibly stupid.  And I dislike profoundly both. She arrived at the famous school and the first day she is challenged in a cat fight and has to proclaim herself the alpha. She was given the VIP room, a servant and everything imaginable at her arrival and she almost did not blink an eye. The heroine had some character but besides that? She was an 18 years old virgin who lost her virginity in a matter of a couple days with the help of everyone who conveniently disappeared to make it happen with her mates whom came out of nowhere just to mate an alpha she-wolf they never heard before?

The twins are just like one body with two heads and two cocks. The two cocks for the double penetration and for the menage purpose of the story mind you. They are just that. They are brought to be mated with the heroine and you know the expression saying that men have their brain in their little head. How appropriate here. Bland and boring characters.

All I read was “lets fuck”, oh you are a virgin? no problem. Oh but you are dirty little she-wold aren’t you? you wanted a dual penetration without preparation, didn’t you.

Romance did you say? where? The guys never ever made an effort to know her, to court her or anything. They were standing in the corridor and bam it was love at first fuck.

I am not sure I understood the plot really.

Visibly the heroine’s mother was a bitch and life with her was hell. The reason was only developed at the end of the story. Why her father wanted to keep himself hidden and asked everyone to do not tell her her origins as soon as she entered the school? No idea. She was supposed to understand by herself.

The girl was given a full scholarship, with food, plane, VIP accommodation and the heroine never found it a tiny little bit strange? She is attacked with a poisonous knife and she does not find that strange… nope… her reaction? Lets have sex, shall we?

At one point, the character says that she is upset to do not speak Spanish… when the school is located in Italy… Hum, because everyone know that in Italy everyone speak Spanish and not Italian, right?

You know, I am really, really, confused here. I have an incredible hard time to think that this book could have been written by a well known, successful author, invited in numerous conferences to share her expertise all over the places.

For me, this book represents pretty much everything a menage author must NOT do. The plot was all over the place and not developed, the characters were not credible, the romance was replaced by sex scenes, credibility was non existent, the epilogue ending with her two fathers not even on a romantic note? Even the book cover is average.

The only positive note I can say is that the synopsis was intriguing and the writing was easy.

I generally do not review the menage romances I do not like. But this time, I wanted to express my opinion, as a reader who spent 3.99$, as a menage romance reader who read this sub-genre exclusively for over a decade now. It does not mean Mrs Brenna Lyons is not talented. I am sure she is. She would not have published so many books and have this massive fan base if she was not. So I am not sure what to think here. Maybe she had a bad day when she wrote this?

That was not this word I used for this story… 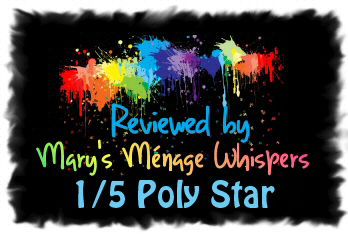 Comments Off on Review: Werewolf U by Brenna Lyons