Eyes Wide Open isn’t the first time I’ve written a ménage novel, but it is the first time I’ve written a M/M/F ménage novel! Previous to this, I had written several M/M books, which I really enjoy, but I did wonder if I’d find it challenging having an established couple made up of two men, and then introduce a woman to their relationship. There was only one way to find out…

When it came down to it, the characters led the way. James and Logan were great to write, such fun, very laidback and cheeky guys. Their relationship with each other is relaxed in some ways, and intense in other ways. But the main thing was that their relationship was utterly solid, their communication was very open and honest, and they were both on the same page about what they wanted.

And what they wanted… was Fiona. The way she finds out about the two men being a couple is, shall we say, rather unconventional, but then that’s James and Logan for you! Fiona is a pretty shy, naïve person, and it hadn’t occurred to her that James and Logan might be attracted to her. When the penny finally drops, it’s linked with a lot of other information that threatens to blow her mind. But can she handle it?

When it comes to writing ménage, I have no problem with the sex scenes. Whenever you’re writing a sex scene, as long as you know which parts belong to who, it’s all good. But it was much more challenging dealing with the emotional side of the relationship, and that’s where I had to spend time in getting it right. It was never going to be easy, and apparently, Fiona felt the same way. Which explains the considerable fireworks… just because she’s shy, doesn’t mean she won’t stand up for what she believes in, or stand up for herself. Showcasing this fiery side of Fiona was great fun, and made me like her all the more. Early reviews seem be favourable towards her, too, so hopefully I got the right mix of sides of her personality… after all, people are incredibly complex, and so fictional people should be, too.

Enter Pride Publishing’s September blog tour competition
for this chance to win an eBook of your choice,
not including boxsets or anthologies.

An ordinary girl catapulted into an extraordinary world meets two even more extraordinary men—but what will she do when she discovers their sexy secret?

Fiona Gillespie moved to London shortly after graduating to take advantage of the opportunities the capital could offer. However, months later, she’s still living in a horrid flat and working in a grimy East End pub. The problem is, she doesn’t really know what she wants to do, career-wise. So when she happens upon an advertisement for a job at a plush Mayfair hotel, she jumps at the chance. A great deal of determination and a spot of luck land Fiona her dream role.

But working at the Totally Five Star London is just the beginning. She adores the role and flourishes, impressing her bosses and making her increasingly determined to climb the career ladder.

While her career is flying, though, her love life is non-existent. She hasn’t even thought about men, never mind met or dated one for months, so when she bumps into two gorgeous businessmen in the hotel, she’s surprised to find her head has been well and truly turned. Even more surprisingly, they flirt with her—both of them! She’s drawn to James and Logan, despite feeling that they’re way out of her league.

When a misunderstanding leads Fiona to James and Logan’s sumptuous top-floor suite, she has no idea what she’s about to uncover. Scenes of people-trafficking, drug-pushing and wild sex parties all appear in her active imagination. Yet what she actually sees is something she’d never even considered before, something that piques her interest.

After discovering their sexy secret, what will she do with this new-found knowledge?

The same, actually.” It was James who spoke this time. “Well, not exactly the same. We were in Soho too, and some drunken arsehole kicked off in one of the pubs. It turned ugly and a bunch of people started fighting. We weren’t involved, of course, but we witnessed the whole thing. As soon as we could leave, we did. Didn’t feel like going anywhere else after that, so we thought we’d have a couple more quiet ones in here before heading to our suite.”

Fiona wrinkled her nose. “Ugh, yeah, I can understand why you wanted to get out of there. Not good. You certainly wouldn’t see that kind of behavior in here. No wonder you guys like staying here so much, especially if you have a suite.” As she said the words, their implication sank in. If they had a suite, then they weren’t just successful, just well off. They were filthy rich. Again, she asked herself why the hell they were talking to her. And—if she hadn’t gotten it totally wrong—flirting with her a little, too.

“Oh yeah,” Logan said. “We always have a suite. We take up quite a lot of room.” It was then she noticed that he’d almost finished the Jack Daniel’s and Coke he’d bought. “And it certainly helps that the suites are soundproofed.” He let out a bark of laughter and grinned over the table at James, who returned the smile, but his looked forced—more like a grimace.

Clearing his throat, James returned his attention to a confused Fiona. “So, where are we currently on the interesting scale? Do I need to start dancing on the table?”

Tutting, she replied, “That sort of behavior wouldn’t be allowed in here, either. I dunno… You’re somewhere between ‘quite’ and ‘very’, I guess.” Then her curiosity got the better of her. Dead cats be damned. The hotel was enough off the beaten track that traffic noise wasn’t an issue. “How about this? If you tell me why having a soundproofed suite is such a good thing, I’ll let you buy me another drink.”

The men glanced at each other, and James glared at Logan momentarily, before altering his expression to a charming smile. “Oh.” He waved a dismissive hand. “That’s nothing interesting, I’m afraid. He snores.”

Logan’s resultant indignation and spluttering told Fiona everything she needed to know. “No way! If that were true, why would Logan have mentioned it with a big grin on his face? People don’t publicize the fact that they snore—much less to the extent that soundproofing is necessary. Come on. What is it? Wild parties? Loud music?” She lowered her voice. “Crazy monkey sex with supermodels? Swinging from the chandeliers? 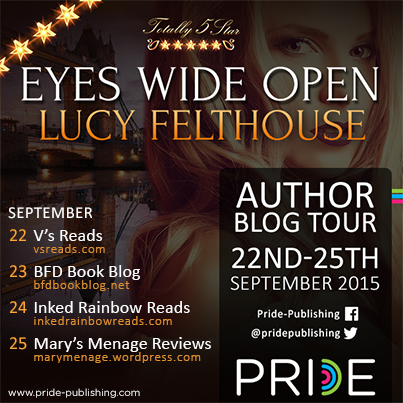 First book from Lucy Felthouse and very interesting in many ways.

It has been a while since I read at first person. I am not sure I really enjoy it. I prefer to know each character’s thoughts and personality which is more difficult to do when the story is written at first person only. However, pages after pages, I wanted to know more about Fiona. Will she find the job of her dreams? Will she become successful? And once she got “there”, what next?

But after few chapters, I got hooked and I was definitely into the plot so it was no longer an issue. The plot is definitely the highlight of Eyes Wide Open. The title made much sense once I ended the story and it was definitely appropriate.

It was the journey of a woman. Sometimes, I felt it was even written as a diary. I could see events and images just like a movie but with no script so it was definitely interesting and new. Most of the stories I read are very predictable and it is sure not something we can say with this story. In fact, the epilogue left me a bit dry as I was almost expecting a chapter when all heroes were old and grey. It was probably the right epilogue for this story but I personally felt it was not enough romantic for me. On top of it, the choice of the epilogue did not match the very career oriented heroine. I was a bit disappointed by it.

The story is labelled “menage” which it is. There are definitely two men and one women relationship. But for me, it was all about her. So, if you expect to find a romantic love story. You will not find a lot of it in this book. The heroine was guessing and guessing and guessing again if she could have more than a fling. I guess I found the hesitation of the heroine to be involved with the men a bit too exaggerated and probably took a bit too much place in the story. I understood her hesitations but it was a bit too much and this disturbed me because at times I did not feel it was a romance. In fact, the romance came quite late in the story and maybe it was the reason why I did not find the romance. So no sex heat and no romance for me.

However, the author, Lucy Felthouse, was very detailed to explain every thoughts, feelings, hopes, fears of the heroine to the point that sometimes I felt the author was describing herself. So it was interesting to follow her journey, a very credible journey. Because it is true that it is not common that two men are teaming up and are interested to have a long term relationship with a woman. So from this perspective, it was indeed interesting.

I wanted to know more about the heroes. I felt hungry for more because I knew almost nothing about them. They loved the hotel, they were rich, they came to the city regularly and that was pretty much it. I truly wanted to know more and the author, sadly, did not feel the need to give them more focus. For me they were accessories in the story. She could have ended with anybody, really. I did not understand why the heroes picked her and decided she was the one. Very little conversation and immediate knowledge they wanted her? It did not feel much believable. But then again, pretty much all the romance I read are hardly believable and the heroes fell for the heroine in a matter of minutes. as if.

It was her story all along. So no equality for me.

I totally enjoyed the “English” style. No doubt the author knows very well London. I have a soft spot for English authors. A lot of them add some humor that I am always looking for and rarely get from the American authors. So definitely a cherry on top! 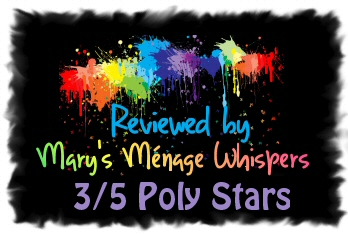