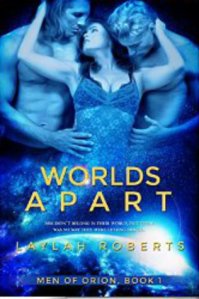 Laylah Roberts has loved reading since she was little and has recently discovered the passion of writing. She enjoys creating different characters-but they all have some similarities. The men are dominant, take-charge and the women love them with all their heart. Even when they’re being stubborn and domineering!

Kalia’s life was boring and predictable. Her one rebellious act ends up with her being alone and pregnant with no one to turn to except the sexy, gorgeous Talon.

The first time Talon catches Kalia’s scent he knows she’s meant to be his. There was just one problem.

Garret doesn’t want another mate. One is enough. He doesn’t have room in his life for anyone else. Especially someone so fragile. But there is something about Kalia that pulls him toward her. Something he simply cannot ignore.

Warning: Contains a grumpy Alpha male, a sexy wolf shifter and a heroine who finds her happy ever after.

Guess this story was not for me. at all.

I found so many inconsistencies and inequalities that was not even funny.

The story started like a bam, straight to the action. Not bad as an entry. different. Enough to intrigue me.

So here are the characters: one sweet loving guy, one dumb heroine and one asshole.

I should stop here my review, yet I cannot. I am grumpy, just like the warning put in the synopsis by the author.

I do not mind grumpy characters. They are generally fun because when then fall, they fall hard and passionately. I like passion. What I did not like was the caveman ass behind the grumpiness.

At first, I thought it was a first release, then after researches, it is far from it. I wanted to find an excuse because I thought the author was a newbie and when I saw the list of already published stories, I changed my mind. This is definitely the way this author love to portray her characters. I also checked the reviews (always after the reading), and found many great reviews about this story. Some made me laugh…

It’s not a bad book but one of the lead male alien sounded more like he was from Texas then outer space. Debs (3 stars)

This is a sci-fi romance book that will leave you wanting more (…) I have to admit that this is one of the only authors I can read where there is more than one partner involved… but maybe because the males leads are so strong, dominating, sexy and caring which may have something to do with it. Amazon Customer (5 stars)

So this makes me wonder… Are all the males in Texas, caveman prehistoric alphas that rope their partner and dump them on bed when they have an itch?

Obviously Laylah Roberts’ fans think that she is doing a great job writing a menage with very VERY little sex and love interaction because we all know that menage is only sex with two people out of three and love must be platonic right? “Wanting more”? I guess when there is no menage à trois before almost the end of the story, yeah, I guess the “wanting more” is accurate. (twisting the words me???)

The story has 175 pages. For over 110 pages, it was a MM story with NO love, NO sex with the heroine. They even went on a pleasure planet to have sex with a woman when one of the hero knew she was his mate. They did not have sex with the whore but it was totally anti-romantic to read that the guy who knew she was his mate agreed to have sex with another woman to please his other mate… while she was staying almost alone on the ship waiting for all the crew to be screwed by whores.

So lets start with the inconsistencies. Sorry, many spoilers here.

One hero, Talon, knows immediately (first 2 pages of the story) that the heroine, Kalia, is his mate… yet he never ever said she was his mate to his other mate, the grumpy asshole one, Garret.

Talon and Garret got sex many times together, yet Talon being a shifter, a werewolf, never felt the need to mark his mate or claim her,

Kalia is 5 months pregnant, yet when they finally decide to have sex with her… she becomes an expert of BJ when she admitted she had sex 3 times only in her life…. she is asked to kneel to give a BJ and be penetrated… let me repeat here a detail you may have missed: 5 MONTHS PREGNANT. Along the plot she rides a horse, still VERY MUCH PREGNANT, mind you, because we all know doctors very much recommend this type of exercise right? ooo and lets not forget that she ate bread only for weeks and the foetus was juuuuuuuuuuuuust fine. Ladies, ladies why do you all bother to eat well, have vitamins, be healthy when eating bread only at the early age of crutial gestation is enough? Save your money for something else… riding a horse at 5 months pregnant for example…

Garret decide that he liked her after all, just like that, no warning. bam. Lets have sex. He treated her like shit but then when he finally acknowledged that she is their third, sex is the answer. She is tired? no problem! Lets have some sex! You wanted to run away with no money, in a foreign planet because you did not want to see them having a (minor) argument? Lets have sex to remind you to do not think, remain at the place you were told… thinking and saving the crew in the process is not an acceptable option! Sex, on the other hand…

They finally decide to pay a visit to her father to ask him why he sold her to slavers and why he wants her child and potentially save the 17 years old sister forced to marry a 50 years pervert…. They enter the palace with pretty much no resistance, scare the father and collect the screaming sister… because maybe, yes maybe, the sister was in love with the 50 years old pervert… or maybe because nobody explained to her she was rescued by her sister and not prehistoric Neanderthal guys?

Comments Off on Review: Worlds apart (Men of Orion, #1) by Laylah Roberts