The journey of Monroe, Angel, and Zachary from Two Doms for Angel continues in Caught By Two Doms.

Angel: Rescued after being tortured by white slavers. Her haunted eyes beg two men for love.

Nathanial Monroe, must face his deadly past to keep the people he loves safe. Leaving Angel behind is hard but with so much left unsaid, leaving Zachary is nearly impossible. Monroe’s forbidden goodbye could change their shaky dynamic forever.

Zachary must somehow come to terms with his desire for the man he owes everything or he could lose Angel too. Zach’s background in the world of law enforcement leaves little flexibility when it comes to the strictures of acceptable love.

When tragedy strikes, Zachary and Angel must face a world they never saw coming and discover the strength in a bond more resilient than the strongest rope.

Can Angel pull the people she loves into her web of safety where she’s Caught by Two Doms?.

Every time I think I read the best of the best menage romance, a new story shows up and tops the previous one. Right at this minute, I am telling you: this is the most incredible menage romance I have read, so far. Wow, just wow.

You may have read my 5-stars review Two Doms for Angel, which is the prequel of Caught by Two Doms. I loved it. When I read the last lines, I was already upset that it was over. I knew by then that the author, Holly S. Roberts, planned to write a sequel of this story so I was happy but already impatient to read it. It took a couple of months, which is very quick in the writing world but too slow for the fan world.

So here I am. Holly S. Roberts asked me to review her story prior to the release. And I felt very privileged when she contacted me. In fact, I am always privileged when an author asks me to review their ARC story. It is their newborn and they take a chance of being told, it is an outstanding or a meh story.

I went thru three different stages with this story:

Honest to Gawd, I cried like a baby. I was sobbing on my pillow. I was swearing. My tee was even wet for drying my eyes all the time. I am NOT kidding! I was so very upset that I was dropping a few words in private to Holly (who was not online at that time, good for her)… here is what I sent to her:

My pillow is wet and it is only page 50

Dammit….. I still hate you…

I am JUST starting to forgive you now…

So, you get the picture.

Part 2, I was trying to digest everything and wanted to move on with the story. I was not happy about it but I was already in too deep not to continue. Plus, Holly kept saying: “Keep reading!” with a bunch of hugs. I am a sucker. I cannot resist hugs so I continued even though she refused to say anything about the story, no punch, no clues, no spoilers.

If I thought I knew what a roller coaster of emotions was before Caught by two Doms, I was wrong. This was it.

Part 3, was just the cherry on the cake. It was sweet. It was funny. It was romantic. It was everything I hoped and wanted in this story. I read the epilogue a couple of times with the same smirk on my face. I dare you not to have the same smirk too! Ha!

I was not sure about the choice for the title. I asked Holly S. Roberts and she said:

It’s actually Zach and Nate’s love story but Angel’s the reason they both fight for what they want because they love her so much. And the rope captures them all.

I was thinking: Caught in the Middle but after her explanation it made sense.

Something I realize now is that I adore, the different POV’s chapter after chapter. It gets me into the mental state of each character step by step and it is fascinating to discover the fears, the love, the passion, the insecurities. Most authors use one main POV for one of their characters, generally the heroine, and give little POV to the men. I’m accustomed to that but when I read a story written by Holly S. Roberts, when she gives full POV chapter for each of her characters, this is when it makes all the difference, at least for me.

You will find everything in Caught by Two Doms: intensity, passion, despair, love, and sweetness. I honestly mean it when I say, everything.

I am biting my tongue for not spoiling anything of the story here. Lets just say that I was not expecting some parts and my first reaction was frustration. But I kept reading, not because Holly S. Roberts told me so, but because I knew that somehow I would not be happy unless I read it up to the end.

How right I was on this. *sigh*

I will not explain again what is the Shibari art. You can find explanation HERE, or HERE and if you are more visual, go watch some videos HERE. But in fact, this story is about Kinbaku, since it is associated with sensual and sexual practices. Do not feel bad if you do not know the difference. Only initiates do know but this story will give you the opportunity to open slightly the door of this mysterious world. 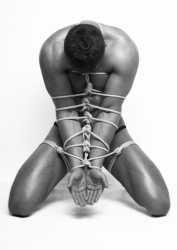 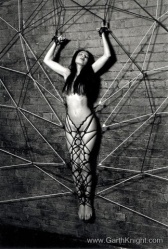 Monroe character is a Nawashi (rope master). I was already fascinated in Two Doms for Angel about him and I ended the story wanting to know more about him. I wanted to know in depth this intriguing character, totally mysterious. Caught by two Doms gave it to me. I fell for Monroe really hard. And when I say hard, it is an euphemism (remember the crying part I was mentioning earlier? yeah… THAT hard!) I have no idea how I would react to a man like that: submission, protection, something else? Monroe is one of those character that you are curious about and borderline obsessed. I was, anyway. Obsessed, I mean.

I thought at first it was Monroe’s story but It was also Zachary’s story, Zach is the typical straight man coming from an homophobic professional field where gay or bi are rarely accepted: cops. A man must be macho and manly and in any case be anything but straight. Caught by two Doms is the journey of a man that discover the hard way that he is not as straight as he thought he was. His transition was credible. I understood the insecurities and the life changing decision he made.

Angel remained herself, a submissive. However, I did find her way stronger compared to the first book. I found her at peace with herself and what she wanted. She wanted to love her two Doms and be loved back and she had no issues which path to get it.

Holly S. Roberts added a great plot into the relationship. It was more than ropes and sex. It was the perfect combination of romance, sex and intrigue. Sadly, because of the epilogue, I know that I will not be able to read more of them.

I am officially announcing that Holly S. Roberts is now part of my crush authors menage à quatre, along with Nathalie Acres and Kim Carmichael. 🙂

Comments Off on Review: Caught by two Doms by Holly S. Roberts