Three for Keeps by Lila Munro 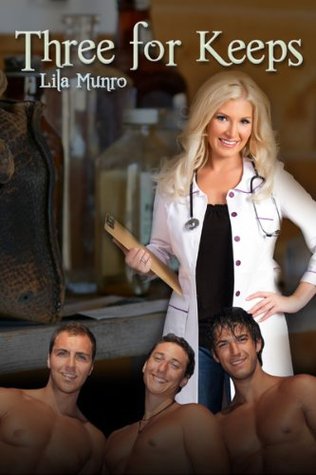 What a great story!

When I read the blurb, I was intrigued. I bought the book and put it in my to-do read. I was under the impression that this story would be a comedy menage.

How wrong! Again, I am a bit upset to notice that the cover does not reflect the characters and the story AT ALL!!!

Okay. Yes, the heroine is a vet and she is indeed blonde. Yes the models look yummy on the cover but what disturbed me was they were all kind of laughing. I hardly see covers with models that are laughing or smiling huge. So of course, I honestly thought it was a comedy which I was fine with do not get me wrong. I was just waiting my mood to be ready to read a comedy. 2 days ago, I was. Then the more I read the story, the more I thought it was NOT a comedy at all.

But before I start grumbling about the covers, I will talk first about the story.

It is the kind of story I like very much. I could learn to know each characters and one by one I fell in love with them. The heroine is the kind I like the most: bratty, witty, sweet. The males were different but the kind I love: 3 for the price of 1.

With 3 males, we have the best of it. There is the sweet/cuddly, the brat/funny and the intense/dominant. From my perspective, it is indeed the best. It is very rare to find all those qualities in one guy. Most of the authors find this a winning combination and they are right. Sometimes it is a bit over the top but when the personalities are not, then they are perfect.

Lila Munro decided to concentrate her story on the four characters. She could have added extra drama with the “mothers” who did not like the heroine, Zoey but I was happy she did not jump on this easy way to add extra drama. It was not needed.

The story is about four individuals who could not move on when one of them decided to run away, not enough mature at that time to express what she wanted at the time which of course was a ménage.

I liked that all characters had each a life in between and not the kind of hero who just stop living and wait the return of the hero. As if. Nobody stops living, stops having relationship waiting for the big love to return. Unfortunately a lot of authors think that they must describe their characters like in fairytale. The “I loved you so much that nobody was right and I could not stop thinking about you during all those years…” is of course what we want to read in a romance but there are ways to write it and I just stop all connection with the story if it is over the top. I just loose it. I am way older to enjoy a Disney erotic story, feels weird. I’d rather read a story I can really relate with. Some characters that failed, experienced, matured.

Three for Keeps is just that.

Yes, sometimes I was a bit upset with one male character that I found a bit too caveman with the “strip!” orders when the heroine was raising her opinion. I do not enjoy the “shut up… strip… lets fuck so you will understand how wrong you are with some bondage sex”. The caveman act is not sexy for me. It irritates me.

But besides that, I really enjoyed the story. I loved the last chapters. It was not expected and I really liked it. In many ways, I found this story outstanding and it sure deserves a 5 rating… minus the cover but in the grand scheme, I will just let it be.

Lila Munro says in her bio that she finds her inspiration around her. She is an army wife. I would love to meet the guys she described in this story. Mrs Munro? Can you give me their phone number pretty please? 😀

Zoey Matthews is in love. She’s been in love since the day she was dropped off by a social worker at yet another foster home on a back country road miles from nowhere, Missouri. At age ten, she met the men of her dreams. Over the course of sixteen years, Dane Cardwell, Jack Devereux and Ryan Wilkins fell in love with her, too. They’ve each told her they love her, they’ve shown her and each man has gone so far as to ask her to marry him. But what they don’t know is Zoey loves them all.

Her game of kiss and not tell all comes crashing down around her the night of her graduation from veterinary school and Zoey runs for the mountains. Of Colorado. Hoping to outrun her obsession with three men and forget them all together, she stays gone for ten years. But the wound has never healed. In fact, it’s done nothing but fester. Needing to clear the air, Zoey agrees to spend a few days back home with the boys never imagining it would turn into a week filled with comparison sex as Dane, Jack and Ryan each try to get Zoey to choose between them and their varied tastes.

When she finally tells the truth, a truth only one of them has known all along, Zoey fears the foursome will never be able to make a sharing relationship work. After all, aren’t there just too many personalities and desires to sort through? Add in the kink factor and things get really complicated. Zoey’s not convinced the truth has any merit, but there’s one thing she knows for sure…this time she’s playing for keeps.

Comments Off on Three for Keeps by Lila Munro